The Origins of Political Order: From Prehuman Times to the French Revolution 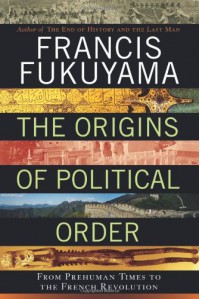 The author does a definitive survey of political development through out the world while avoiding the ODTAA ("one dang thing after another") trap survey books of this kind can often fall into. This kind of information often pops up in many of the books I read, but is never covered as a primary topic nor as definitively as this author covers this topic. Usually, it's hard to get a good description of the political history of Islam, India and China, and most authors force the story into their comic book characterization narrative of those societies so that it will fit into their narrative so that they can show the supposed superiority of the West. This book doesn't do that whatsoever and gives each region it's full due respect.

The author not only looks at each major civilization and parts thereof as an end in itself but will contrast it with the familiar when needed.

Political systems need three things in order to prosper fully: accountability, transparency, and "rule of law". All three aren't necessary, but each sure do help. The earliest systems start with a "kin and friend" system and develops from there. The author steps the reader through the process and how it differs depending on the civilization.

The author shows that Rousseau (man is perfect until government corrupts him) is wrong about everything, Hobbes (government is only to protect against violent acts) only gives a barely adequate government, and Locke (live, liberty and pursuit of property) gives the most responsive government, and the author shows how these stages can develop or never existed in this first place as in the worldview of Rousseau for the different societies studied in this book.

The author speaks with authority on the topic and this book filled in a lot of holes on the topic that I got from reading other books which never fully developed the topic.
Tweet