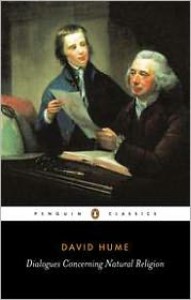 I don't like most of the New Atheists (Dennett is the exception). They take their arguments beyond the point they should. They seem to open up a needlessly indefensible special hatred towards Muslims hence allowing for a non-tolerant person to occupy the White House and appointing a white supremacist to the NSC. This book shows in nuanced ways how to argue against dogmatist while not also becoming a dogmatist in the process. Nothing really changes under the sun, and Hume's book is still as relevant today as it would have been if it were published in his life time (which, of course, it was not).

I've got a really special affection for this book and Galileo's "Dialogue Concerning Two Chief World Systems". Hume was obviously influenced by that book and one can tell by the way he gives it special mention within this book. He mentions that within Galileo's book much of the first part of the book is meant to refute the Peripatetic notion of sublunar substance verse the heavenly perfect essence ('quintessence'). Much of this book is also to defend against the pernicious teleology and the special pleading for an immaterial nature of an undefined substance that magically interacts atemporally (often referred to as God) that permeated his time and still lingers today.

A simple book. A brilliant dialogue. I really wish they would make a movie of this book. I can say with certainty that all the apologia that gets presented in the God exists debates I watch online would get shot down by Philo (the skeptical philosopher in the dialogue). The modern debaters use different formulations but the kernel of their arguments always rely on some variation of a Thomas Aquinas/Aristotle final cause with a prime mover argument and something only known to them "objective morality" whatever that may be.

Philo is always reasonable. He'll use reason as his guide. The typical arguments used by apologist fall into at least one of the following categories: 1) ontological, 2) cosmological, 3) objective morality only comes from God, 4) meaning of life must be outsourced to a God to avoid nihilism 5) I feel it in my bones and know it is true 6) or we are in the best of all possible worlds therefore some evil is possible. Hume refutes them all within this short text.

1) is the question of being. It's a variation of Anslem's proof of God. I've been reading St. Aquinas lately and he quickly dismissed those kind of arguments. Hume (through Philo) will say that for any dichotomous statement to be true that the negation thereof must lead to a contradiction. If 'being' is a necessity it follows that 'not being' must lead to a contradiction. It will not. Therefore, the necessity of being (or God) is not provable ontologically. Aquinas rejects them differently but just as effectively.

Hume points our how the dogmatist must often resort to infinity to make their point. That is God must be all knowing, all wise, or another omni. Since likes must come from likes (their language) our mind must come from an infinite mind or similar logic which leap into eternal or infinite spheres which add nothing to the defense except confusion and obfuscation (as pointed out by Hume).

Hume yields on design (a variation of the cosmological argument, and today we might even call it fine tuning). He knew evolution is a fact and calls it such within the text but doesn't have the explanation of natural selection in order to fully grasp its full meaning and implications. According to Hume (through Philo), the world is too complex, humans, animals, the eye, and nature work too well to not have been designed by something. He'll grant a designer or multiple designers but nothing more.

I've never have been enthusiastic about the 'theodicy' argument. Hume thinks it refutes a Christian God and that's why I cited Liebnitz's "best of all possible worlds" above. Because, it can be a response to evil. I liked Liebnitz's "Monadology" and would recommend it. Hume is fair and gives Liebnitz a mention for it. Hume does take the presence of evil and superstition further then I would in his arguments against religion.

Hume is a good presenter for all sides. For me, I favor the position of "hard atheist". It just means that I don't reject all notions of God, but only the ones for which I've heard about so far. There could be a rational and reasonable story to be told for which I am not aware of. Hume, at least within this book, gives credence to a creator God(s). He ultimately would not be swayed by 'a priori' arguments (before the fact, or from first principles, deductive, or without empirical data) and is opened to 'a posterior' arguments (after the fact, derived from data, inductive, or from particular to general). I'm always open for good arguments and Hume is an expert at tearing apart poor reasoning.

Intolerance of others leads to white supremacist in the White House and on the NSC. Hume shows how to defeat the dogmatist while not becoming one.
Tweet