The Book of Mormon: Another Testament of Jesus Christ 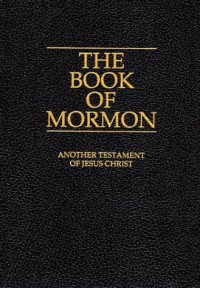 I'm probably one of the few non-Mormons who have read this book cover to cover. From this book alone I can understand why Mormons tend not to like Donald Trump as much as I tend to not like him. There's a niceness that's entwined within this book and faith means charity and considerations for 'others' is a major theme within this book, but dividing the 'us' into the 'them' is antithetical to the narrative told within this book.

This book provides an interesting peek into the most American of all religions. I find most of the Old Testament boring beyond tedium, and most of the New Testament was written by what most people today would consider as a psychopathic killer prone to visions and imaginary voices (Saul of Tarsus is not a role model for me), but the Book of Mormon gives enough of a story with a mixture of New Testament philosophy mostly of Jesus' sayings and worded such that the positive comes through.

This book alone does not tell me how the Nephites (sons of Lehi) ended up in the New World. I like to think that they entered a portal into a parallel dimension or at least a multi-world universe through an eternal recurrence gateway, because it would be hard for me to understand the story otherwise. Twice, once in 2600 b.c. and another in 600 b.c. migrations from people in the middle east made it to the land of bountiful.

The value of the book is clearly how Americans thought about the world in 1830 and gives hints into the unique qualities of the zeitgeist of the time.
Tweet