A Companion to Hegel 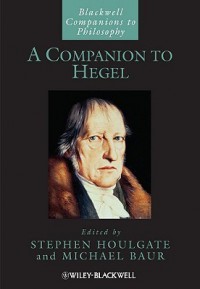 I love Hegel. I only discovered him last year when I had stumbled upon his Phenomenology quite by accident where on a whim I decided to listen to the three minute snippet for which Audible had provided. I was hooked.

This volume is incredibly listenable. I thank audible for providing it. Each of the thirty chapters are written by scholars for students.

I would never entertain undertaking 'a companion to' any other philosopher but Hegel. Often it seems as if he writes like James Joyce did with "Finnigans Wake", but the thing to realize is that no matter how complex the sentence seems because of the odd use of the words that compile them there is always a meaning that can be extracted. It just has to be found.

These authors of the independent essays step you through beautifully by what they think Hegel really was getting at. For me, the key is to realize that Hegel is talking about how thought leads to thinking and the concrete is what he's getting to only at the end of his philosophical musings. I felt like this volume was like taking a whole Junior year level worth of courses in philosophy because in the guise of talking about what Hegel thought about the topic all of the major topics within philosophy are discussed so that the listener understands every major area that would be included in a year of advanced philosophy courses.

There is a reason I really have enjoyed reading Hegel and about what people say about what he is saying. At the heart of what he's getting at is usually one of four things, a) the start of consciousness within the individual (the 'I/we' within us), b) the relation of the self to the other (the 'I/we' between us, c) the other in relation to the whole and d) the relation that being, becoming and nothing have to each other. In other words, Hegel explains in understandable but abstract language the here, the now, and the I and how the I is the we and the we is the I and the other is as important as the self from within ourselves, between ourselves, and within society throughout history.

The fourth item, 'd' is covered mostly by Hegel within his book, "Science of Logic". I had read it last year and thus previously to having had listen to this Companion. Sometimes, I had wished that I had read that book after having had listened to these essays. They did such a good job at elucidating what Hegel was really trying to say in his Logic that I would have gotten more out of the experience by reading the Logic after having listened to this book.

I found all the chapters edifying. I was always grateful when they ended because just one more item on the topic would have seem to have been one topic too many, but they all seemed to have ended before they caused an overload.

The real point I'm trying to make is that this series of essays really worked together. The authors never snuck in arcane philosophical words or terms, and if they did they would explain what they meant, and if I started not to understand something within an essay it would end up being re discussed latter in another essay clearing up any difficulty I might have had earlier.

This companion goes way beyond just Hegel and ties together many diverse topics within Philosophy thus making it one of the best text on Philosophy I've come across.
Tweet