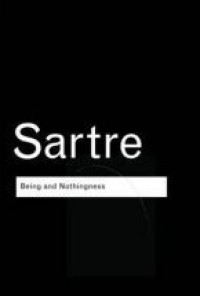 Instead of reading this book I would strongly suggest watching the "No Exit" with Harold Pinter available on youtube written by Sartre. It illustrates a large part of his philosophy of the Other, the Look and the self. And, you'll get a hint on why Sartre doesn't work today. In addition, my favorite phrase ever and the one that I make as my own comes from that play "l'enfer c'est les autres" (hell, is others), and my second favorite is "vous ete mon bourreau" (you are my torturer).

I think the three ugliest words in the English Language are "be a man" (or equivalent statements such as don't be a sissy, act like a man, your weak, be tough, stop being a woman, and so on). Books likes these are what allows that kind of thinking to take place. Matter of fact, he uses that framing in one of his examples about being too tired to climb a hill and the fear of "being a sissy" is what motivates him to keep hiking. Yes, I realized it was just an example he uses but he really goes to pains to defend it. (Even in today's New York Times (February 6, 2016), I saw a story on how China thinks they need more men teachers because the male students are "timid, self centered and weak" like girls and need to be taught to be men. I'm not making this up. That kind of thinking just permeates even today).

This book is completely passe today. Time has past it by. I'm so glad the 1950s through the 80s are behind us. This book's popularity during that time period is clearly because the way it tied itself to the various schools of psychoanalysis (Gestalt, Adler, experimental psychoanalysis, and even Freudian but with twists) and they could use Sartre's argument to re-enforce their psychoanalytical paradigms. Sartre ends the book by trying to change the paradigm slightly to what he calls "existentialism psychoanalysis". I don't think it ever caught on.

He tweaks the Freudian approach of where behavior is explained by "libido and will to power" to a paradigm that considers the 'choice of being' from the freedom the individual posses acting for the project (the future). In my opinion, all he is doing is saying instead of blaming the mother (or father), he's going to blame the person (victim). He never really gets the fact that the mind and body are different and some of our behavior is caused by our genetics (being born that way). He's really falling further down the rabbit hole and wants to blame the victim for lacking culture, community and the proper values. Cognitive Behavioral Therapy (and other such techniques) and effective drugs came along in the 80s and started making a difference because they were so much more effective than "talking therapy".

His real fundamental error about seeing the world is along the lines of when he says "Pierre is not a waiter he is only acting as a waiter' and "there is no such thing as homosexuals, there are just homosexual acts".

The author really has a warped view about love with his concept of possessing and possessed and domination, and appropriation (taking). He thinks other people take away from our freedom by existing, we are always becoming, and our choices are always are own (you choose to be homosexual, or neurodiverse, or OCD, or any behavior you have). The only thing we are not free to be is not free.

Even with all my negativism expressed above, I can still recommend this book. It only cost me $2.05 and credit at my favorite used book store and I'll get credit when I most certainly return it. It's a perfect example on how we got off track as a society, but managed to move past woo from books like this one. The author is not hard to follow. (He's not really a philosopher in my opinion). Never trust other peoples opinions about someones philosophy until you've read it yourself.