The Infinity Puzzle: Quantum Field Theory and the Hunt for an Orderly Universe 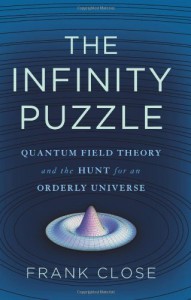 There's almost not a wasted word in this book. If you blink while listening, you might lose track of the physics. The author is very good at writing a history of quantum science from QED to looking for the Higgs boson.

He uses the narrative of the scientific players to describe the physics. There is nothing of the physics or the math for which he does not explain before he talks about it. The problem is the author explains the physics at the moment of introduction than assumes that you will understand it and won't explain it to you again.

A large audience of people won't like this book. If you don't follow the physics as he introduces it, the narrative of the history will not be enough to entertain you. He only introduces the physics once and assumes you get it. He covers so much of modern physics he really doesn't have time to repeat his clear explanations more than once.

What I liked about this book he really filled in the details for what has happened since quantum mechanics was fully developed and the Large Hadron Collider has gone online. I had read many books on each and had mostly just walked away with that particles were very small. Now I have a very good feel for what's going on and why the Higgs boson is so important.

His last chapter was a marvelous summary of the book. I only wish he had summarized more of the physics after he explained difficult concepts more frequently.

I don't want to mislead. This book is a very difficult read. Some one with no real background in physics can follow it, but it requires ones full concentration. He covers the topics so well, I'll probably never have to read another history of that period of physics again for a long time.
Tweet